According to the FBI, an “active shooter” is an individual actively engaged in killing or attempting to kill people in a populated area.  A “mass shooting” is when three or more people are killed indiscriminately not including the perpetrator (www.fbi.gov). An active shooter can impact any business or organization at any time.  They often act without overt warning, without confiding in anyone, and without regard for their own lives. They act out of mental sickness, hatred, avarice, and revenge.  Sometimes, an  active shooter had, at one time or another, been a part of the community in which they later wreaked havoc e.g., former students, employees, contractors or customers), while others have no connection. 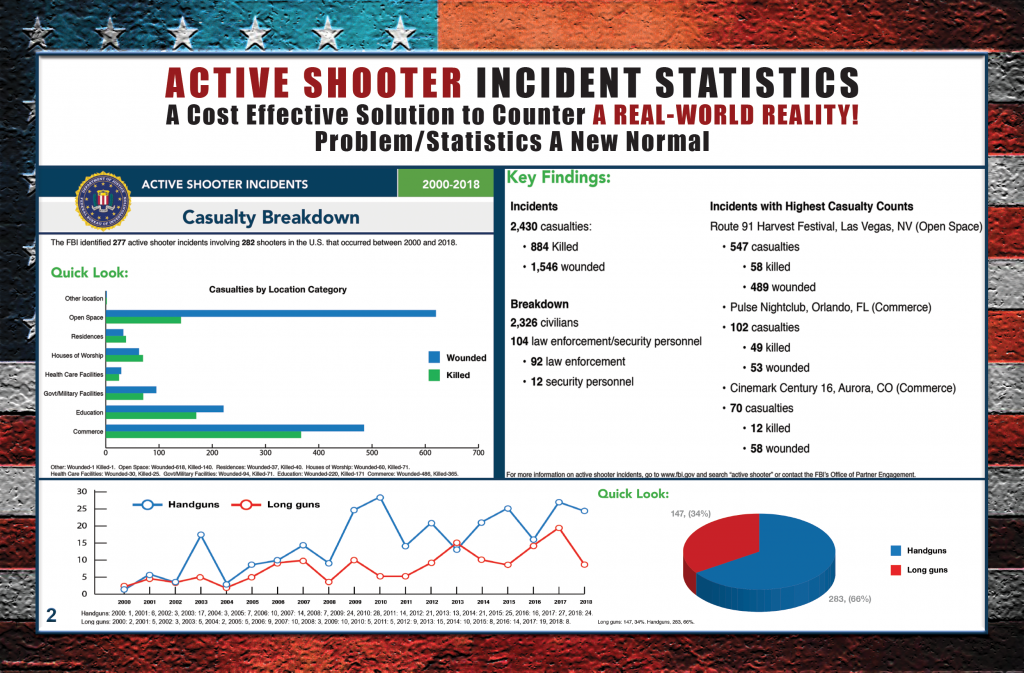 45.6% of active shooter incidents occur in commercial businesses and 24.4% occurr at schools.

According to the FBI’s study (www.fbi.gov) of active shooting incidents from 2003-2013, 45.6% of active shooter incidents occur in commercial businesses and 24.4% occurring at schools. The FBI states workplace violence costs anywhere between $6 and $36 billion dollars per annum, with 66% of workplace homicides being retail sales staff (www.bls.gov).  For any commercial business or retail store owner, these numbers are staggering and disturbing.  95% of companies do not have the resources nor the ability to handle the loss incurred from an active shooter event on their property according to the Insurance Journal (www.insurancejournal.com).

The Emergency Automatic Gunshot Lockdown (EAGL) system can integrate with most any building security system.

As retail shopping malls trend away from the big box “anchor” stores to attract a more diverse customer base, many instead are using space for fitness clubs, IMAX type theaters, theme parks, high end restaurants, office space and nightclubs to offer a different kind of retail experience. The results of these shifts in retail direction may increase risk by having tenants who serve alcohol into early morning hours or movie theaters that remain open until very late exposing the patrons and employees of these venues to additional kinds of threats.

The Emergency Automatic Gunshot Lockdown (EAGL) system can integrate with most any building security system. The EAGL’s indoor/outdoor wireless gunshot sensors detect gunfire and activate within seconds of shots fired by automatically securing building perimeters (an option). EAGL will then notify law enforcement via text messages, emails and phone calls of the active shooter threat with a map of the building showing the location of the shooter and ballistic data of the weapon being used. EAGL will then automatically live stream CCTV from the building to security and law enforcement to help identify and track the shooter providing critical situational awareness to law enforcement and EMS. Public address and mass notification systems can be activated by EAGL to alert building occupants, and others outside the building (parking lots/garages), of the active shooter threat and directives on where to go for safety.

“For some, no amount of weeks, months or years will ever be enough to make the theater just another under-lit place to see a movie. It’s a place stained with too much tragedy, too much loss, too much heartache.”

On July 20, 2012 at the Century Theater in Aurora, Colorado, a lone gunman walked through an emergency exit that he had previously propped open. He walked into a packed movie theater where he shot 70 people using a shotgun, AR-15 style semiautomatic rifle, and handgun. Of the 70 shot, 12 died. It was three years before the theater fully reopened. Statements taken from the Aurora Sentinel, July 20, 2015, “For some, no amount of weeks, months or years will ever be enough to make the theater just another under-lit place to see a movie. It’s a place stained with too much tragedy, too much loss, too much heartache.” “I don’t even drive down that street, and I avoid the mall, too,” says another Aurora resident. While the state and federal civil liability suits were dismissed against the theater owner, Cinemark, the long lasting effects from the shooting will be felt in the community.

If EAGL had been part of the building security system at Century Theater or at Pulse Nightclub the results would have been significantly different.

First, upon the initial discharge of a firearm outside the Pulse Nightclub the early morning hours of June 12, 2016, EAGL could have locked the exterior doors of Pulse, and either stopped or deterred the shooter from entering the building.

If law enforcement had been aware of the location of the shooter at all times a more immediate engagement with the shooter could have occurred and lives could have been spared.

Automatically, and within seconds of shots fired, Pulse’s CCTV system would have engaged from the gunfire to direct the nearest cameras towards the shooter, and to live stream the footage to the responding law enforcement and SWAT teams, First Responders, and EMS to provide necessary data to react quickly to the grim situation. Each shot fired while inside of Pulse nightclub would have given SWAT a constant eye on his location and the nearest camera would be following capturing imagery and live streaming data. The cameras would have aided police in locating the people wounded and hiding inside within seconds after arriving to the scene, enabling them to rescue the hostages and those hiding much sooner. If law enforcement had been aware of the location of the shooter at all times this would have resulted in a more immediate engagement with the shooter, and would have likely spared many lives or critical injuries. Instead, many of the Pulse Nightclub patrons were severely injured or died while waiting and hoping for help, frantically texting and begging to their loved ones and law enforcement to save them. The terrorist would not have had three hours to carry out the worst terrorist act in the United States since September 11, 2001 had the EAGL system been in place.

In the case of the Aurora, Colorado theater shooting, the EAGL system would have sent immediate, clear messages to 911 and those on the mass notification list. Even though the Aurora Police Department is only two miles away from the theater, and the police arrived within two minutes of the first 911 call, it was too late. It is stated in the Aurora Theater Shooting After Action Report (AAR) critical messages to First Responders were not sent and some “not understood”.

Had EAGL been installed and integrated into the theater’s CCTV system much of the “unknown” in this situation would have been significantly reduced or eliminated had law enforcement and EMS had the opportunity to view live video stream coming from inside the building at or on their way to the scene. This would have allowed for the command center to formulate a more organized and exact response. This would have saved lives by properly identifying the most critically wounded and triaged them sooner before they bled out in the theater. Public address and mass notification activation may have given the occupants of the theater critical extra seconds needed to escape the violence.

Retail shopping places are the heart and soul of most communities where young teens to aging adults gather to socialize, dine and enjoy a day of shopping. Holidays and other events during the year draw families to the mall get their picture taken with Santa Claus, or for young children to pick out their first bicycle. Malls are the hallmark of most communities, and as they move in improving the retail experience similar attention should be invested in improving security to also align with our times.